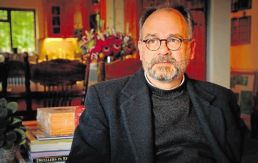 Zirk van den Berg made his debut with a number of Afrikaans short stories in 1989. In 1998 Zirk moved to New Zealand where he started writing in English. The crime novel Nobody Dies was published in New Zealand, where after it was released in South Africa in Afrikaans in 2013. The book won the film category inaugural KykNet-Rapport book awards in 2014 and Van den Berg’s film script – adapted from the book  – is currently being considered for production.

Zirk, if I’m understanding things correctly you have two novels that are being considered for film?

That’s right. After ’n Ander Mens won the Kyknet-Rapport award, Herman Binge of Lion’s Head Productions in Cape Town commissioned me to write a script. Last I heard, this was under consideration by Kyknet. Recently, Neil Sonnekus from Stinkwood Studios bought an option on the film rights of my Boer War novel, Half of One Thing. Neil is also a South African now living in New Zealand.

Regarding ’n Ander Mens. Few writers have ever successfully bridged the gap between novel writing to screen adaptation. How difficult was the process?

I had actually written scripts before that were produced by the SABC in the early 1990s – two one-off dramas in a series called Vierspel that gave new writers a chance to develop their screenwriting abilities. Maybe because so much more money is at stake, screenwriting has been codified and dissected to a much higher degree than novel writing, and it’s a great discipline for any fiction writer to get to know – though not to slavishly follow.

Writing the screenplay for ’n Ander Mens forced me to re-engage with my novel in a new way, which was quite interesting and enlightening, especially since so many years had passed since I first tried to put the idea onto paper back in 1998. Because film scripts are so structurally driven, I actually saw how I could have improved the book. On the other hand, the somewhat meandering early part of the book has its own charm, for me anyway. On the whole, it was challenging to write the script, but also deeply enjoyable to revisit a story and characters that are so close to my heart. I loved it.

Was writing your own screenplay, based on your own novel something you would have done without it being commissioned?

Probably not. I’m a prose writer first and would rather work on new stories than rehash old ones. Writing novels gives you more freedom and you have greater control over the final product. Also, I just happen to really like stringing words together, the poetry of it.

Stinkwood Studios purchased an option to the film rights on your novel Half of One Thing. What does that mean?

I’m not a 100% sure! My understanding is that Stinkwood Studios now has the right to develop the story for screen, seek further investment, etc. I’m thrilled that it has happened, even though it is just the first step on a potentially long and uncertain road.

How much of a say does a writer have when it comes to novel adaptations and sticking to the story?

That would depend on the specific people involved, but in principle the original author need not have any further involvement or say at all. Neil Sonnekus and I did talk about me attempting to write the script for Half of One Thing, but I have other writing I’d rather do at the moment and he’s a scriptwriter himself, so… I just passed it all on to him. We did discuss my thoughts on the story though.

What would you like to stay true within the story?

The essential story of Half of One Thing is about a specific decision Gideon makes towards the end. This turn of events was the starting point for the book, and everything else in the story is there to provide the context and motivation for it. So that is the one thing I asked Neil to retain. For the rest… Things that work in prose may not work in film, and vice versa. As a filmmaker, he understands that better than I do.

When will you know whether either of these works are set for casting and ready for film?

It could be tomorrow morning or many months from now. Filmmaking is an expensive business, and you need many people to agree, and at least some of them have to have lots of money. It’s out of my hands, and I’m carrying on with my life and writing as if this isn’t happening.

What is the one thing you’d like to point out to any writer who is approached to sell the rights for his work for the purpose of film?

Can I do two things, rather? One is that the book still exists. This is something I heard Etienne van Heerden say when there was talk of filming his novel Toorberg. Whatever happens in the film, if it turns your book upside down and paints it purple, you still have the book. So don’t be too precious. The second one is don’t expect to become rich or famous – keep your day job.

By the way, this is one of the most misleading things I encounter in fiction and occasionally in real life, namely the assumption that anyone who has a book published becomes rich. I even remember a movie where a character in America says he’s going off to London because someone has shown interest in his novel… A fool, I thought. Very few authors can survive on the proceeds from writing fiction. Fewer still get rich. You probably know all their names.

Do you feel your career in writing has been more successful outside of South Africa or would it be similar if you remained within the country?

In truth, I think I would have been more successful had I stayed in South Africa. The Afrikaans publishing world, in particular, I find much more supportive and lively than what I have encountered in New Zealand. Also, I guess my sensibility is shaped by South Africa, and it doesn’t necessarily travel well in other markets.

What made you decide to republish your work in Afrikaans?

When Nobody Dies appeared in New Zealand in 2004, I sent the manuscript to a number of South African publishers. Nobody was interested at the time. However, one of these publishers, James Woodhouse, kept the manuscript and nearly ten years later, when the market had become more receptive to local crime novels, he approached me about a translation. So in a way it was his decision rather than mine, though I absolutely welcome it.

Has the Afrikaans version been equally successful or more so?

The best comparison I have is Half of One Thing, which appeared simultaneously in Afrikaans as Halfpad Een Ding. If I remember correctly, the Afrikaans version outsold the English by something like two to one. Apparently this is not unusual or surprising to those in the South African publishing world.

Did you ever envision your success to come to where it is today?

I know that I have been luckier than some writers who are very deserving, but also that many people who write derivative drivel have done exceptionally well, at least commercially. And commercial success does mean something, because getting money for your work frees you up to do more of it. To be honest, I would like to spend more time and energy on writing fiction, so I guess the measure of success I have now is actually less than I had hoped for. But it’s not over yet…

What would you say to any aspiring writer out there?

You will never become a better writer just by thinking about it, reading about it or dreaming about it. Do those things if you want (I do), but you can only become a writer by actually writing. And if the process of writing gives you joy, you gain something wonderful, regardless of your success or lack of it out in the world.

What’s next for Zirk?

For the last couple of years, I’ve been working on what I hope will become a series of what can broadly be considered historical crime novels, set in German Southwest Africa in the years between the Boer War and World War One. The first book is ready for any publisher who wants it, and I have completed the first draft of the second. I would like to write at least one more book before giving the setting and characters a rest. However, I realise it’s a bit crazy to be writing sequels to a book nobody may want to publish in the first place. I do enjoy it though.

Can we expect any additional novel to film adaptations?

Not likely. Film, whether in the movies or on TV, is arguably the primary story-telling medium of our time, and it does infiltrate one’s thinking as a writer. However, I haven’t yet written anything with its filming potential in mind.

Is there anything readers and fans can look forward to?

I have been rather disciplined over the last few years, writing very consistently insofar as the everyday pressures of life allow it. So I will keep on writing stories and sending them to agents and publishers. Whether they actually become books people can buy, depends on the decisions these people make.

Half of One Thing

You can read four of my short stories for free on http://saybooksonline.com/free-fiction/

And maybe in the not too distant future, you can enjoy them as movies.